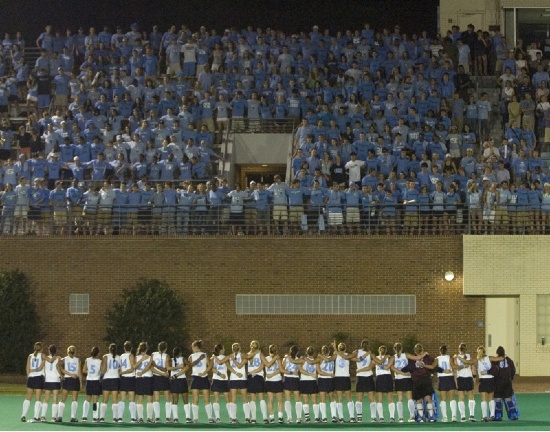 The UNC Field hockey team finished their perfect season today, beating Penn State 3-0 in National Final in College Park, Md. to secure their fifth national championship and only the fifth time in Division I history that a field hockey team has gone undefeated. Congratulations to the Tar Heels.

Maybe the football team could learn a thing or two from these girls on how to finish games. 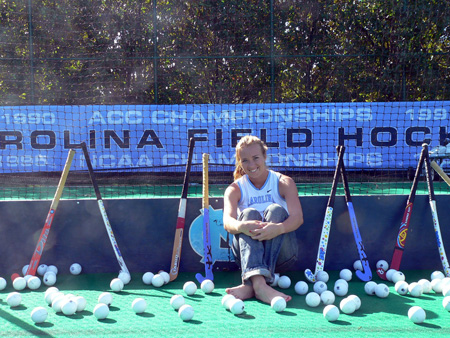 The North Carolina Women’s Field Hockey team has finished the regular season as the #1 team on the country, with a perfect 18-0 record, including 5-0 in the ACC. They’ve beaten many of the nation’s top teams, including Duke, Wake Forest, Virginia, William & Mary, Penn State, James Madison, and Old Dominion. And they have done so in convincing fashion. In their last 13 games, UNC has outscored their opponents 64-2, shutting all but one of their opponents, William & Mary. 64-2 is the definition of dominance. The student body has not been ignorant of Carolina’s success; a record crowd of 1,318 (well above Henry Stadium’s capacity) came to watch UNC beat then-#2 Wake in the home opener.

Statistically, the Tar Heels are led by Seniors Rachel Dawson and Jesse Gey, who lead the team in goals; Freshman Katelyn Falgowski, who leads the team in assists; and redshirt freshman Elizabeth Drazdowski, who is 3rd in goals and has hit 40% of her shots (a field hockey players’ average shot% is around 20-25%). Sophomore Brianna O’Donnell has been excellent in goal allowing only 5 goals in 980 minutes of play, an 0.36 goals against average.
The Tar Heels begin postseason play on Friday in Newton, Mass. for the ACC Tournament, and almost certainly will be the favorites to win their 16th conference title and 5th national title.

Posted in ACC, Field Hockey, NCAA, North Carolina, Tar Heels, We shall eat them and clean our teeth with their tusks. Leave a Comment »