As if this week wasn’t big enough in North Carolina (the two UNC-Dook games), today is football signing day, Butch Davis’s first. Believe it or not Bunting was able to bring good recruiting classes. If only he could coach himself out of paper bag. You can go to Tar Heel Blue to watch Signing Day Live, but you have to pay five bucks. My blog is free.

8:30 am: Carolina Signing Day Live just interviewed Offensive Line Coach Sam Pittman. One of the most awkward interviews ever. They asked if he could play guitar. He said he could play Skynyrd. First of all, no you cn’t. Second, we don’t want to hear about your guitar skills (unless they are truly awesome). We want to know how your blocking schemes are going to get the Heels their first 1,000 yard rusher since Mack Brown bolted for Texas.

8:35 am: UNC just signed Devon Ramsey, from Lawrenceville, N.J. Apparently he played three positions in high school: RB, DT and CB. That’s what we need, a running back who isn’t afraid of contact.

8:40 am: We are going to have three QBs vying for position in 2007 (Joe Dailey, Cam Sexton and Mike Paulus). And they are all going to suck.

8:55 am: Coach Davis is being interviewed right now. So far, he just been making the usual talking points, as well as intermittently giving backhanded complements to John Bunting, which is known in my house as “smilef—ing”.

8:59 am: Carolina just signed Tydreke Powell, a DT from Ahoskie, NC, and on of the top 10 DTs in the country. He was a teammate of Aleric Mullins, another highly touted DT who signed with UNC last year.

9:02 am: UNC just signed Cam Holland, an OL from Pittsburgh. Butch Davis just talked about his aggressive style of blocking. He’s said that about 300 other lineman, knowing his line of work.

9:07 am: Whenever I load a new page, the connection with Tar Heel Blue keeps breaking up. I think I’m missing a lot of the juicy bits. And to think I paid five bucks for this. I think I’ve been smilef—ed by Tar Heel Blue.
9:10 am: Good lord. The two commentators for UNC assigned to Signing Day have perhaps the Dorkiest outfits ever. I know the basketball shorts have argyle accents, but that doesn’t mean your sweater!

9:36 pm: Perhaps the key to landing Marvin Austin will be in landing LB Romale Tucker. He’s a teammate of Austin in DC, and is considering three of the same schools (Illinois, Maryland, and UNC). If Tucker signs with coach Davis, then the big fella might follow suit. I know that is an insane piece of logic, but this is an insane blog. Therefore the argument holds water.

9:55 am: Recruiting all of the players is an accomplishment, but getting them to get their asses off the bench and play well as a team is a challenge in itself, as shown by this team building exercise.

11:00 am: There has been a lull in coverage over the last hour or so, but here is a list of the major recruits who have committed so far:

DT Marvin Austin is still on the board, as are major prospects DE Kourtnei Brown, QB Billy Bob Orsagh, and OT Kevin Bryant.

11:24 am: Just looked at the film of RB Ryan Houston. He had over 2,000 rushing yards and 32 touchdowns in his Senior year. He is both very fast and very strong. My big concern is whether or not he will be able to hit points of attack decisively, at least early in his career.

11:42 am: The Heels signed Offensive Tackle Carl Gaskins from Melbourne, Fl. Another recruit we stole from SEC territory. 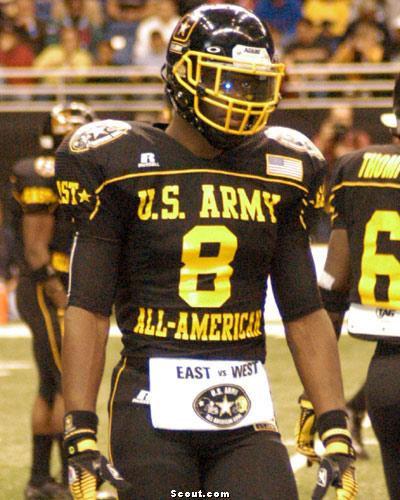 12:23 pm: Signing Day Live is showing film of Wide Receiver Dwight Jones. With his size (6-5, 210) and speed, he looks a little like Terrel Owens on the field. Hope he doesn’t remind us of T.O. off the field. Rashad Mason is just as big, and he can really jump. This is a huge asset for a an inaccurate QB (see Dailey, Sexton).

12:43 pm: We haven’t had consistent success since Mack Brown’s last year. Coach Torbush’s teams had good defense but terrible offense. During the early Bunting years (2002-2004) we had a very good offense (led by UNC best QB ever, Darian Durant) and a porous defense. only during 2001 did we put both together enough to play well, and in 2006 we were among the worst on both sides of the ball. Butch Davis is going to have his hands full.

12:56 pm: I still can’t believe that we landed the #1 defensive lineman in the country. What’s more amazing is that he turned down the likes of Florida State, LSU, USC, and Tennessee. Sorry, Loser With Socks, but he’s ours. More on Marvin Austin a little later. 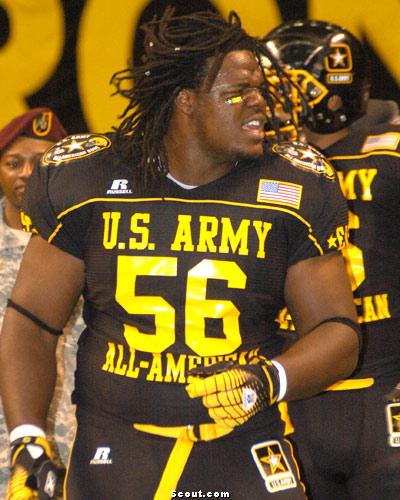 1:05 pm: Adam Lucas is one of Tar Heel Blue columnists, and he is one of the guys covering signing day. He looks extremely uncomfortable in fromt of the camera. He seriously has the body language of someone who wishes that he didn’t have a neck.

1:12 pm: UNC signed 375 pound offensive lineman Kevin Bryant. Adam Lucas said that UNC justified recruiting him because of his dancing ability. What has this world come to when we determine which offensive lineman we recruit based on which one gets served?

The Butch Davis Press conference is at 4:00. The live blog of Signing Day will resume then.

3:55 pm: According to Scout.com, UNC’s recruiting class is ranked #15, 3rd in the ACC and ahead of the likes of Ohio State, Georgia, West Virginia and Oklahoma. How is it possible for our recruiting class to be ahead of Ohio State?!? It must be that Butch Davis will also wear a sweater vest on the sidelines. That has to be it.

Here is the “final” list of recruits committed to UNC.

4:20 pm: Unfortunately, the local networks aren’t showing the press conference anywhere on TV. Don’t worry, you’re not missing much. Most coaches act like politicians in these press conferences.

Needless to say I am very excited about football season. I want to see what our defensinve line will be like, anchored by Marvin Austin, Tydreke Powell and Aleric Mullins. I want to see how good the passing game is going to be with Greg Little, Dwight Jones and Hakeem Nicks, no matter who is throwing the ball. I am REALLY looking forward to football season. Maybe now the Heels football team will stop sucking.

But now there are more important matters, namely the UNC-Dook Men’s and Women’s basketball doubleheader. Look forward to the live blog tonight; on Thursday I will be attending the game, and I don’t have a press pass (yet), so I will provide a review after the game. But man, football season can’t come soon enough.