As part of this season’s college football BlogPoll, Doug of Hey Jenny Slater will provide pollsters with a regular roundtable of questions throughout the season. this past week, he provided us with the preseason round of questions.

1. In his “visiting lecturers” series posted on Every Day Should Be Saturday over the past few months, Orson Swindle asked each participant to explain which country, during which historical period, their team most resembles. Let’s bring everything up to the present day and ponder: Which current sovereign nation is your team? Or to look at it another way, how does your team fit into the “world” of college football?

I can’t use the Russia example from my own visiting lecture, as 1996 Russia and 2008 Russia are two very different situations. In 2008, I would say that we most resemble India. We do have an old football culture (we were really, really good in the 40s and 70s-mid 80s), but we are relatively new in the modern college football scene (unless you were paying attention to the ACC in the mid 90s or earlier, you probably don’t remember UNC being any good; but trust me, they were). We have potential, and we are stockpiling talented youngsters for future success. We’ve yet to really make a mark on the world around us, but we have reason to believe our time will come soon enough.

More importantly, however, it gives me an excuse to play the greatest video in the history of the internet (beware of the subtitles):

I only lament that there is no one on my team named Oliver.

2. Every preseason roundup has to have some discussion of who’s overrated, but let’s go beyond that. Which team do you think is poised to crap the bed in the biggest way this season relative to high expectations, and which game do you think will begin their slide into ignominy?

Clemson is a tempting choice, but the law of average says they should live up to expectations eventually, and I just don’t see any ACC teams challenging them.

I say it’ll happen to Kansas. They were very impressive last year, but they lose their defensive coordinator and several key players. The Jayhawks were also lucky not to face Texas or Oklahoma in their conference schedule. No such luck this year.

South Florida aside, I don’t see them being challenged much in their early schedule. I think they’ll go 5-1 or 6-0 to start the season. Their rude awakening will be against the Sooners on October 18th. None of their remaining games are guaranteed wins, and we may see a collapse similar to the one Cal had in the second half of 2007.

3. On the flip side of that coin, which team do you think is going to burst out of nowhere to become 2008’s biggest overachiever — this year’s version of Kansas ’07, as it were — and what’s going to be the big upset that makes us all finally sit up and take notice of them? 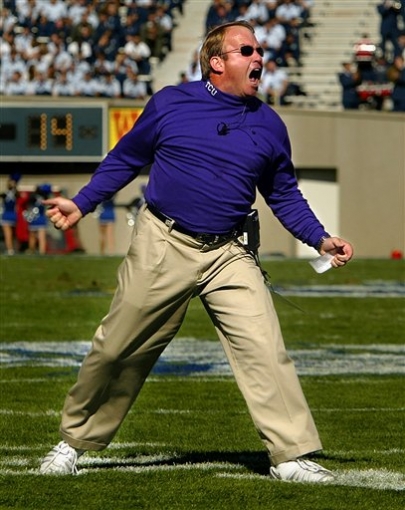 I cannot pick North Carolina team for this, tempting as it may be, since that is the team I root for. I’m going to take Doug’s route a step further and delve deep into the Mountain West. I put TCU at #25 in my Blogpoll ballot. The Horned Frogs are perhaps the most consistently good mid-majors in the nation, and they’re expected to bounce back from an 8 win season in 2007, which is actually mediocre by Gary Patterson’s standards (56-18 since 2002). If they catch Oklahoma by surprise like they did in 2005, everyone will be on TCU’s spike-laden bandwagon.

4. Here’s an “I’ll hang up and listen” question. I put Ohio State and Oklahoma #1 and #2, respectively, despite their recent high-profile BCS face-plants. Where did you rank those two teams, and did those BCS issues have anything to do with it?

I have Ohio State at #2 and Oklahoma at #4. The Buckeyes bring back much of their 2007 squad. If that was a rebuilding year for the Buckeyes, I shudder to think what they will do in the weak Big Ten this year. Their game against USC is a bit of a play-in game; I don’t see anyone challenging OSU on their schedule except for the Trojans, and vice versa. I think Oklahoma is a top 5 team, and they certainly have the talent to be in the title game. I put them behind USC at #4 because 1) I don’t know enough about this year’s Sooners to place them at the top and 2) I don’t see anyone coming out of the Big 12 unscathed.

5. Last season was a statistical outlier in countless ways, not the least of which was the fact that we ended up with a two-loss team as national champion. Do you think anyone plays a strong enough schedule to get MNC consideration as a two-loss team this year? Conversely, do you see anybody managing to sail into the national-championship game undefeated?

I think there will be madness at the top, but not at the Vietnamese boathouse levels we had in 2007. The OSU-USC winner has the best chance of going undefeated. As I said before, I don’t see a conference opponent giving either team enough of a challenge for me so say “I think the Trojans are going to lay an egg in Corvallis” or anything of that nature.

As for a two loss team…well, there will come a day when a 9-4 team will leapfrog a 10-2 team to make it into the national championship game. And that team will be from the SEC.

In all seriousness, I doubt we will see a two-loss national champion again for a while. It’s just too much of a statistical anomaly, and it will be a while before we see the #2 team in the nation, having averaged nearly 40 points per game, be held to single digits in their home finale by a 4-7 rival.

6. OK, time for some Olympic fever. Which athlete from the Beijing Olympics — any sport, any country, with the exception of USA basketball since those guys are already pros — would you most want to add to your team’s roster this season? No worries about age, eligibility, or even gender; we’ll worry about that crap later. 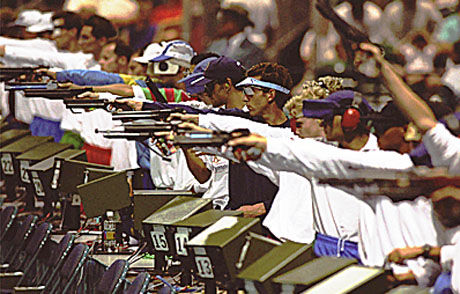 Usain Bolt is wayyyyy too obvious a choice, as is Michael Phelps. I would pick someone from the modern pentathlon. What is the modern pentathlon? In essence, it’s the obstacle course for 19th century outlaws: fencing and shooting (self defense and general debauchery), swimming, horseback riding and running (for the getaway), all in one day. From this event, I’m picking two time gold medalist Andrey Moiseev of Russia. I don’t care what position he might play. The modern pentathlon is badass, and there is always room for a badass on a football team.

My second pick would be someone on the Argentinean soccer team. UNC really needs a kicker this year.